A downloadable game for Windows, macOS, and Linux

A/N: This is the first game I ever made during NaNoReNo 2015. I figured I'd upload it to itchio for anyone who never got a chance to play it or for those who'd like to play it again.

The story takes place three years after the events of Ocarina of Time. In yet another alternate Ocarina of Time timeline (I know there are enough of those already), after alerting a young Princess Zelda of Ganondorf's real intentions, he decides to remain an adult for reasons that are his own. However, ominous things begin to happen making some wonder if threat of evil is at an end.

In the midst of this, a travelling hero named Orson pays a visit with our protagonist, Kietha. Through a series of events, Kietha ends up embroiled in an age old conflict while attempting to find her own path in life.

Wisecracking, sharp, unrealistic dreamer. Kietha comes from a far away tropical land that's more known for their tourism than their fairytales. That has never stopped her from obsessing over heroes and fairytales, though, and one day dreaming of becoming one herself. She ends up falling for the words of travelling hero and running away from home to be protégé to Orson. It's only after that she realizes her mistake, Orson is a world class swindler and Kietha is a coward, deathly afraid of even the smallest of monsters.

Polite, caring, and selfless. Known across the land as the Hero of Time and savior of Hyrule, from the outside he is the perfect painting of a fairytale hero. However, his years of being forever connected to destiny and legends have affected him in ways that not many people can see. In order to be the role model everyone expects him to be, he's locked away his true self.

A pompous, self-centered, master manipulator. He travels the world under the guise of a hero for hire. Those who fall for his tricks are taken for all that they are worth. His talents include running, hiding, and having a decent idea of how a sword works. However, as harmless as he looks he's still not to be taken lightly less you want to find a knife in your back.

Kind yet firm. After the death of her father, she was made Queen of Hyrule at a young age. She is the primary force behind the resurrection of Hyrule to its formal glory before the time of Ganondorf. In lighter times, she treats Link as a brother, as they are both prone to bickering when it comes to the dangerous quests that he partakes in. However, by ignoring potential warning signs in her effort for peace, an evil has begun to take root in the shadows.

Smart, patient, but evil to her core. An earth mage and once a faithful follower of Ganondorf, she was unable to stop the end of her master's glorious reign. For the past three years she's been silently gathering power and knowledge in order to free Ganondorf from the sacred realm. The mysterious disappearances of the sages and the recent influx of monsters and minions are her doing.

Arrogant, power-hungry, king of evil. Even in his prison, Ganondorf has continued to plot with Erina behind the scenes. It's unknown what his ultimate scheme is, but in his time of forced solitude, he has developed a deep seeded hatred for the hero that put him there. He will stop at nothing to make him suffer.

Warnings: Some light language and violence

i really like the games you and the rest of your team has made from this game and divide, which are the ones i have played so far

Had a great time playing this!  Got the True End first time, so I'm pretty happy about that, gonna try for the bad route, but I had a ton of fun getting to know the characters!  Hope to see more from you in the future!

Great game! it was like reading a fanfiction lmao. My constructive criticism would be to draw the more of the characters in the story. I was a little disappointed that you didn't draw Malon/Talon/Oldman/Dark Link. Second I felt that some of the characters were drawn awkwardly (Except Link.  I liked how he was drawn.) Mostly Zelda and Erina were the ones who could use a bit more retouching. Lastly, I'm greedy for CGs. I want more than 3 sorry not sorry.

Okay that out the way, Let's focus on the good aspects of the story. I loved the way it's written and how you gave Link more of a personality (honestly I'm glad he isn't a quiet mute who has this perfect hero persona most people try to give him.) He is funny, witty, and has flaws which is great. I also like how our lovely protagonist isn't Ms. Perfect. I love how she is clever, but a horrible fighter. That makes her more charming and likeable. I can't stand perfect protagonists because I can't put myself in their shoes. Kietha also has a small feature to her that is able for me to relate to, but she also gets to be her own person. I applaud you for making a good protagonist.

Okay I think I got everything I wanted to say out of the way. The story is short, sweet, and charming. I encourage you to make more fan-based stories like this. Go you! <3 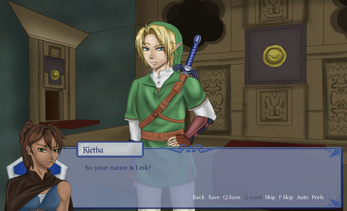 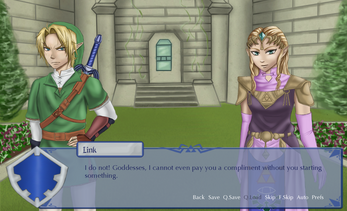 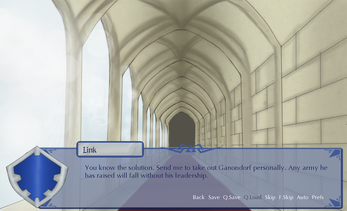